Experiments In WINE and Obsolete Benchmarks

So as of about a day ago at the time of writing this, we no longer have internet. We're in the process of shopping for a new service, so hopefully this post makes it to the web in less than a month, but it's given me some time to mess around with my old systems and try and sate my newfound free time.

It didn't take long for me to become desparate for ideas.

Cue a few hours of finally trying Baldur's Gate II on my XP machine (fun game, I would absolutely recommend if you have a number of days with more or less nothing to do) before a terrible, terrible inspiration struck me. I should see if any of the old benchmarks I use for these pre-2002 machines can run on my main PC.

There were only 2 issues.

Those in mind, my expectations were low, but I was actually moderately surprised. At least 2 old futuremark suites ran (though only one even properly came close to finishing) and were surpisingly stable, considering how finicky WINE can be with old software sometimes. So without further ado, let's meet the contenders (All of which can be found on my files page under the benchmarks section):

3DMark 99 is always a fun benchmark on my old systems. It shines in highlighting the greatest features of the year 1999, and is an invaluable tool for my Pentium II machine.

It would seem that 9x-compatible software is not too friendly with WINE, and unfortunately, our next candidate isn't much better off.

This one honestly surprised me.

3DMark 2000 has always been fantastic in terms of reliability and running on just about everything. It allows me to compare my Windows 98 and 2000 Installations, and runs fine on my XP machine as well. Unfortunately, in this case, it seems that its age has finally caught up to it, as my hardware is evidently just too new for it.

The installer on this one ran flawlessly, registration was a breeze, and it seemed to be just fine. However, when I tried running the program itself...

Alas, it would seem that 4GB of VRAM was never intended to be the amount detected by this program. Maybe they didn't use an unsigned 32-bit value for memory, who knows.

Don't worry though, this is where we finally seem to have some luck. Evidently, it seems 19 years is as far back as we can go, looking now at our first (semi) successful benchmark.

3DMark 2001 is surprisingly robust, and has a fun demo to go along with it too. In fact, it was the only one I was able to run every test on!

Unfortunately, doing so was... frustrating. Be it issue with wine, a quirk with my window manager, or just strange rendering differences, I could only run each benchmark completely independently. If I tried running the full benchmark in a single session, there seemed to be some small period between each test in which the window would lose focus, causing the test to fail. As a result, I had to individually run each test one at a time to get a final score, but my stubbornness knows no bounds.

Without further ado, bear witness to the fruit of my stubbornness, the first full benchmark comparison between my modern system, a ryzen 1600 PC equipped with an RX 470, against its' 2003 counterpart, a beefy Athlon XP 3200+ PC with a Blazing-Fast ATI Radeon 9600 Pro and a whopping 2.5GB of RAM. 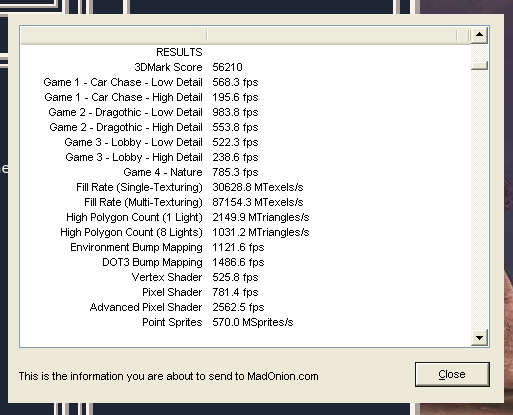 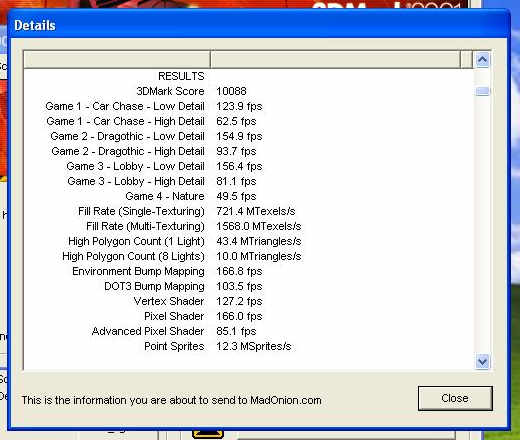 Overall, I was surprised. Even with only 2 of the tested benchmarks actually running, I still learned a lot about both of these old systems here. It's not often you get a way to compare systems with an 18-year age gap, I suppose.

Also, this post officially marks the first blog-style post on my site! I'm still working out the styling, so forget the strange borders on some things, but I expect to start posting these more in the future! I probably will find a different way to attach them to these pages though, rather than just having all the HTML directly in the page. maybe I should go and rely on PHP includes again? Who knows, that's a question for next time. Bye for now!